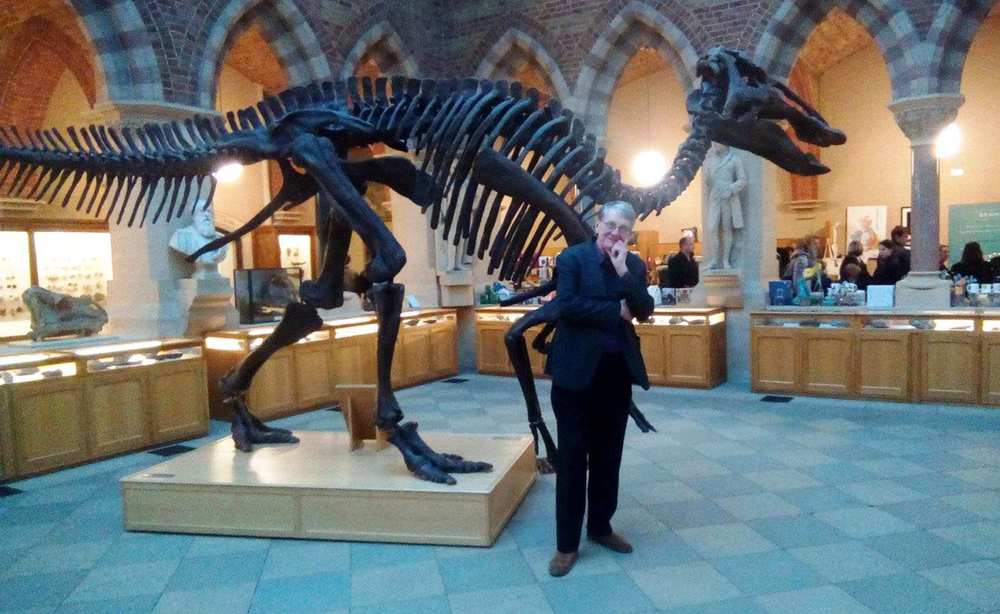 Former BBC radio journalist Douglas MacLeod is one of the oldest students at the University of South Wales (USW), after deciding to pursue a Masters by Research degree in his mid 70s.

Originally from Inverness, Douglas left school after his Higher exams (A-level equivalent) and worked in a variety of roles in hospitality and public relations, before moving into journalism. He became news editor of Good Morning Scotland, a current affairs programme, and made several documentaries on major news stories of the past, such as the Gulf War in 1990-1991 and the Lockerbie bombing of 1988.

This exploration of history sparked a fascination for the hinterlands that surrounded the stories, and the fact that history is an ongoing process, rather than a single event or series of events.

“It’s an old cliché, but journalism is the first draft of history – or at least it was; social media and the immediacy of news has changed the landscape in recent years,” said Douglas, now aged 75.

After retiring from the BBC in 2006, Douglas did a degree in History with the Open University, before revisiting the subject that had interested him as a young boy – nuclear power. He is now in his first year of a Masters by Research at USW, exploring the rise and fall of the nuclear power industry.

“I followed the industry’s fall closely when I was younger, because Scotland had a high proportion of power generated by electricity, particularly at the Dounreay fast reactor research station at Caithness [in the Scottish Highlands]. So my research is looked at through the prism of the Caithness Fast Reactor programme, which was the last gasps of the British nuclear industry as an independent industry.

“That’s why I went back to study this period of history, because I had this feeling that journalism was just the tip of the iceberg of all these stories, and history is the hinterland of them.

“I chose USW because I was looking for a supervisor with expertise in the area of the British nuclear industry, and I found Dr Chris Hill in the History Research Group, who was doing research on the nuclear industry from another angle, which was the mining of uranium. So I put in a proposal, which, happily, was accepted.”

As part of his postgraduate research studies, Douglas has spent time at the National Library of Scotland – where he worked when he first left school – to study the archive materials on the nuclear power industry, and hopes to undertake further research at the National Archives in London and the Public Record Office in Edinburgh. He also plans to revisit Nucleus, a new archive built in Caithness to manage the UK nuclear industry’s records, which include 330,000 photographs and 200 tonnes of documents.

“It’s not an area of history that many people have looked at,” said Douglas. “There’s been some research on nuclear weapons, and on nuclear power, but a lot of is quite partisan; anti-nuclear lobbyists and pro-nuclear proponents, which makes for interesting reads.

“But I'm trying not to explore whether nuclear power is a good or a bad thing per se. It was a huge thing, and one of the problems is that nuclear power started off from the atomic bomb programme, and that’s quite different from how other forms of power came about, such as steam power from the internal combustion engine.

“The weapons programme was the start of nuclear power, and directly from that came the first British reactor that produced electrical power, and only as a by-product of making plutonium for the bomb programmes. The pace of development of nuclear power happened far too fast, which is what caused so many of the problems in the 1940s and 50s.

“When I was a boy in Inverness during that time, nuclear power was terribly exciting. Comics like the Eagle, which had cut outs in the middle pages, saying things like ‘these will be the nuclear ships of the future’, and even predicted nuclear-powered aeroplanes – something that was actually considered for a time, before it was found to be impractical.

“There was a huge ethos of positivism that the future would be clean and nuclear, that was sadly misplaced. The fast reactor was a great idea, but the physics actually said that a furnace could be produced which would make more fuel than it consumed and still produce electricity. Every fast reactor programme in the world, including Dounreay, constantly had non-nuclear problems with the fact that fires kept breaking out in the steam generating plants, and they proved insoluble.

“Billions was spent on this research, which was government funded and is the single biggest engineering research project ever undertaken. The figures are mind-boggling; from 1945 until the mid 1980s, when we stopped developing our own nuclear reactors.

“When I think back to myself as a wee boy, reading my comics and seeing this reactor being built in Dounreay, thinking ‘this is the future’, it’s incredible to think I’ve come full circle with my research.

“Returning to study has definitely stimulated the intellectual side of my brain. It's like exercise – you have to exercise your mind, and I’d thoroughly recommend a Masters by Research degree to anyone who wants to further their university education.”

Join us for postgraduate research

How to access well-being support for your mental health

Join us for a celebration of Refugee Week